October 31, 2010
Halloween 2010 was a lot of fun.  We all went to a pre-Trick or Treat party at a neighbor's house for some music and food.  Around 5PM, I took Dillon, Jason and Adrian around the neighborhood for trick-or-treating while Angie took Cameron back to the house for feeding and diaper changing.  (Already sounds like a hoot, don't it?)

The boys and I hit quite a few houses while we made our way back home.  They had only been out for about 30-40 minutes before I started hearing complaints about their feet hurting, or "I want a drink of water."  So when we got home I asked them if they just wanted to stay in and help give out candy or go back out.  They said they would help with the candy.

A couple of days earlier I had decked out the garage with a ton of bright-colored posters and cutouts, old Halloween costumes, pumpkins, skeletons, etc.  I went to Home Depot and bought about 4 or 5 black light bulbs to hang in the garage.  It turned out pretty cool (see photo).  Dillon enjoyed it until I turned on the sound effects CD and cranked it up.  He couldn't take it and asked Angie if they could go back out and trick or treat some more!  So she took them around to a few more houses while I held down the dungeon with Cameron.

Adrian wore a Superman costume this year, which didn't really fit the "haunted garage" theme, but Dillon and Jason had these costumes called "Unknown Phantom" that were pretty neat.  They reminded me of Jawas from Star Wars.  They were all black costumes with hoods and a mesh-front mask so you couldn't see their faces.  Underneath the hooded mask they wore special glasses that had red-glowing LED lights in them.  It looked great at night.  After trick or treating the second time, Jason became my dungeon master and would help escort our "guests" into the garage.  I wore the weird-looking ghost mask you see in the photo (it's on the table on the left).  It looked great in the black light.

We had trick-or-treaters coming to the house up until about 9PM, I guess.  As the night went on, I would say the age group got older.  Some kids weren't even wearing costumes.  I mean, c'mon!  Put forth some effort, at least.

The kids made out like bandits and we actually gave out about 80% of the candy we purchased for the trick-or-treaters (which is good).

Hope everyone else had a nice Halloween! 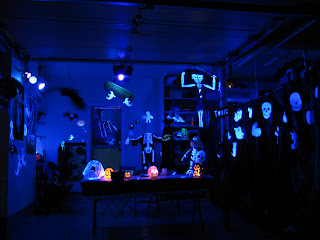