February 04, 2009
Parkway closed because of the bad weather this morning, so I had my second Snow Day of the year. This, of course, meant "Get the twins in their snow suits because it's time to break out the inner tubes again!" Angie stayed inside this time with Adrian. He wasn't too into the snow last week, so we gave him a break this time. Although I think he might have liked it better today because it wasn't raining and miserable. It was actually quite nice.

Unfortunately for the twins, their afternoon pre-school was not canceled so we had to cram as much fun into the morning as possible. I shot some video clips (again) and I took some pictures that I'll post later on today. For now, here's a pic of the twins: 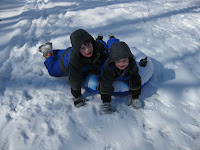