A side effect of this problem was that our power door locks also stopped working within the past two days or so.  This meant that the only way to lock up the car was to manually depress all the door lock switches in the car.  And the only way to open it up was to use the key in the driver's side door, get in, and manually unlock the rest of the doors.  I know... Boo hoo, right?  Well, once you're used to the power locks, it sucks having to manually lock and unlock all the doors.  It also wasn't locking the doors when you put the car in gear.

I did some internet searching and found the solution to the power door locks issue.  You can either disconnect your positive battery cable for about 5 minutes, or you can remove the 20-amp fuse for "Internal accessories" (I think it's labeled IOD on the fuse panel under the hood) for about a minute.  Once the system resets, the locks should work again (mine did).

I also found some instructional videos on how to fix the power sliding door problem.  This guy has a nice video showing you where to look.  My power cable was frayed in the same exact spot.  As a matter of fact, once I pulled the wire out to look at it, it split in two; so it was pretty bad.  Not taking any chances, I disconnected the positive terminal on my battery so that there was no chance the wire was hot when I was working with it.  I simply uncovered the wire, exposing more of it on either side using wire strippers, twisted the wires together, taped them up with electrical tape, and put everything back inside the door track.  Here's a picture of the wire before the repair: 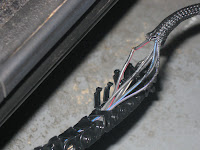 If you're having the same problem, it's worth it to give this a shot.  I've seen estimates online that say that most dealerships will charge you for a new wiring harness and at least one hour of labor to replace the whole thing.  Probably a $300 job, I'd guess; and you'd be without your vehicle for a while.

Anna Schafer said…
Well, once you're used to the power locks, it sucks having to manually lock and unlock all the doors. It also wasn't locking the doors when you put the car in gear.
allen tx locksmith
June 18, 2015 at 12:56 AM

September 14, 2015
Last year (July 2014) I took the PCI Professional online course and passed the exam at a Pearson VUE testing center in Mt. Laurel, NJ.  This year I had to take the PCI-Internal Security Assessor course because it became a requirement at my place of employment.  This past Friday I passed the exam at Pearson VUE so I am now a certified PCI-ISA, and I still hold my PCI Professional title as well.  The PCI-ISA certification lasts only one year, so I'll have to re-certify each year, but the PCI-P certification lasts three years. I felt that these two tests had a lot of overlap, so if you already have the PCI-P certification I would highly recommend going for the PCI-ISA certification if your company is a PCI participating organization and will sponsor you.  The PCI-ISA certification is only valid as long as you work for the sponsoring company.  So if I quit tomorrow or get laid off, I lose the PCI-ISA cert. If you are taking the PCI-ISA course now and are getting ready to take the e
Post a Comment
Read more